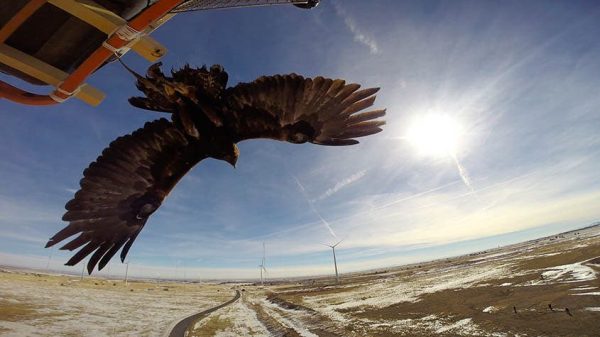 Golden eagles, like many raptors, know how to take the path of least resistance. When they spread their wings and take to the skies, they typically look for updrafts (upward pushes of air) to assist their flight, letting them soar to greater altitudes without expending much energy. However, those updrafts and associated high winds are also valuable for generating clean energy, making wind turbines more of a potential risk to eagles and other flying animals.

While clean energy has many environmental benefits, researchers in the wind energy and computational science groups at the National Renewable Energy Laboratory (NREL) and at Western EcoSystems Technology Inc., the U.S. Geological Survey, Conservation Science Global, West Virginia University, and Lafayette College strive to advance coexistence options for wind energy and wildlife across the United States. Eagles are particularly important in this context because of their conservation status and protection under law.

Understanding and minimizing the risks to raptors is critical to achieving the nation’s renewable energy production goals. Being able to visualize just how these magnificent creatures might fly around wind power plants will help developers and operators consider how wind turbines and eagle wings can safely share space.

Now, they are one step closer to doing just that.

Change in the Wind

A new software — the Stochastic Soaring Raptor Simulator (SSRS) — developed at NREL with support from the U.S. Department of Energy Wind Energy Technologies Office endeavors to predict the most likely long-distance flight paths of individual golden eagles as they ride updrafts. An SSRS user can choose the site, then either provide the wind conditions or ask for a specific date and time. The model, which is publicly accessible on GitHub, will simulate the likely routes golden eagles would take as they travel through the site.

SSRS goes beyond the capabilities of previous agent-based models (with raptors being the “agents”). The simulator incorporates information about an individual site of interest from the ground up while accounting for uncertainties in atmospheric conditions, raptor decision making, and the location where a bird may have been spotted.

The user provides a region of interest, which could be anywhere in the United States, and the model will import terrain features, atmospheric conditions, and turbine locations from publicly available data sources. The model then calculates where favorable updrafts might occur. Finally, the moving parts get added: virtual golden eagles. Starting at randomly or uniformly spaced points of entry, simulated eagles are programmed to minimize their energy expenditure while moving in a particular direction. SRSS simulated paths are then combined to provide a map that shows the eagles’ possible location at any given time.

“A golden eagle’s goal to minimize its energy expenditure will affect its decision making. The model uses that principle to generate a map of probable paths the eagle might take,” said Rimple Sandhu, who is a postdoctoral researcher at NREL and the lead author on the article published in Ecological Modelling.

These relative presence maps highlight potential interactions, if any, where (the several thousand) flight paths may coincide with wind turbine locations. This helps users evaluate turbine placements that might be less dangerous for the birds — and that is just for one point in time.

The simulator is uniquely designed to investigate variations in conditions and eagle behavior throughout the year (seasonal) as well as differences throughout the day and night (hourly).

The team tried out a few example cases at both seasonal and hourly scales and compared simulated tracks to real eagle flight paths from GPS-tagged birds taken near three wind power plants during all four seasons in Wyoming. Although the model is two-dimensional and the observed data show vertical changes, the overlap was promising. The presence maps for migrating golden eagles clearly show a measured contrast between southern migration and northern migration for a particular power plant.

“Observations show that golden eagles tend to fly at higher altitudes in summer than in spring and fall. These observations agree with our understanding of how the airspace shared by raptors and turbines behaves during different times of year,” said Charles Tripp, one of the principal investigators on the study and a machine-learning researcher at NREL. “That can affect when a wind farm operator chooses to operationalize different wind turbines within the plant.”

With the results from SRSS, wind power plant operators could implement smart curtailment measures to avoid wildlife-turbine collisions — all in real time. For example, operators could hone their mitigation efforts to certain, higher-risk times of the year, deploying cameras or monitors during seasons when SRSS suggests eagles might be more active in the area. And wind power plant developers could consider siting turbines in lower-risk locations.

A Convocation of Towers

Although golden eagles have a small population, they do not always fly solo. To explore how they travel in groups, often called “convocations” of eagles, the program can generate a density, or heat, map displaying the relative spacing of the eagles at a resolution of 50 meters (about the length of an average wind turbine blade — roughly equivalent to the width of a U.S. football field). These maps are one source of information that can help wind power plant developers determine the best layout for a field of wind turbines.

Although this model is specific to golden eagles, the authors are confident that their model can be adapted to other soaring birds or regions of interest to help install wind turbines in less risky areas and operate in ways that reduce risks to raptors.

At a recent online workshop, researchers from NREL presented new improvements to eagle models like this one and discussed next steps with stakeholders from the wind energy industry, state and federal agencies, nongovernmental organizations, and academia.

“Considering any negative impact of wind plants on wildlife requires looking at it from all angles,” Sandhu said. “With the help of a bird’s-eye view, wind energy can soar as high as the eagles can.”

A Big Week for Clean Energy in Michigan